On the 3rd of June 2018, which is known as the ‘World bicycle Day’, Eco friendly volunteers successfully commenced their 7th Yathra, the Vanni Yathra 2018. This project focused on creating young green leaders to combat the effects of climate change and promote environmental awareness. This diverse group of thirty youth were chosen from a vast pool of applicants, from all parts of Sri Lanka, and from many religious backgrounds; Buddhists, Hindus, Muslims, and Christians. For 9 days, after the commencement of the programme, these youth cycled their way from Kilinochchi, Vishwamadu (Kilinochchi District), Puthukuduyirippu, Vellimullivaikkal, Mullativu (Mullativ District), Nedunkeni, Pulliyankulam, Omanthai and finally to Vavuniya (Vavuniya District), gathering a multitude of skills and knowledge throughout the journey. The cycling campaign coincided with ‘World Environmental Day’ on the 5th of June and ‘World Ocean Day’ on the 8th of June so the youth were able to celebrate these days with Mother Nature by carrying out various eco-friendly projects. The team used bicycles as a mode of transport in order to minimize their carbon emissions, and to promote, amongst the citizens of Sri Lanka, awareness of how environmentally friendly riding a bicycle can be.

When talking about the biodiversity of Sri Lanka, the district of Vavuniya is not generally given much attention, but during these nine days, the youth were able to explore the multitude of species in this area. They visited many places with flourishing biodiversities, such as the Iranamadu Tank, Theravil Tank, Nandikadal Lagoon, Madavalasingham Tank and many wetlands, and to learn about many species of birds and insects they had previously not known about. It is the sad truth that due to the selfish acts of humans, many of these diverse ecosystems are highly polluted, affecting the plant and animal species that reside in these habitats. The main source of pollution in this area is widespread use and improper disposal of plastic and polythene. The Green Leaders spent the majority of their time spreading awareness about the detrimental impacts on human health, and on educating the public about how plastic and polythene consumption and improper disposal contribute to lowered biodiversity, as well as water and air pollution. The youth also focused on the topics of food safety, spreading awareness on how unhealthy eating habits negatively impact children. From artificial colours and flavours to preservatives, the effects of these additives were explained to both children in schools and to the general public, in order to promote a lifestyle in which young children will have a healthy relationship with Mother Nature, even in terms of their diet.

The projects and programmes that the Yathrees took part in were countless. To name a few, on World Environmental Day, on invitation by the Kilinochchi army headquarters, the Yathrees conducted an awareness programme at the Kilinochchi central college. Additionally, an educational programme regarding food safety was carried out in Pudukuduyirippu central college. On World Ocean Day, an awareness programme was held at the District Secretariat in Mullativu. They also conducted various public awareness programmes and even performed a street drama in Mullativu bus stand regarding the use of plastic and polythene. Through these activities, youth gained much more knowledge and emerged as Green Leaders. With the help of the public, the officers of Kilinochchi district secretariat, and other organizations many tree planting campaigns were carried out. These tree planting campaigns were not considered a normal activity during this programme, as it was so much more. The Green Leaders became more aware, on both an emotional and intellectual level, of the magical potential of the small plants they were planting and how, without the disturbance of humans, these tiny plants can grow to be massive trees that selflessly contribute a multitude of benefits to the environment, including filtering carbon from the atmosphere, providing habitat to many animals, and nourishing the earth with nutrients. Even after its death, a tree provides fertilizer to the other plants around it, continuing to fulfill its duty to Mother Earth. Being made aware of this, the Yathrees were taught to appreciate and respect the beautiful and magical trees for the magnitude of selfless acts of service they fulfill. The Yathrees themselves experienced the selfless acts of the trees around them when they stopped to rest under enormous trees on the side of the road that gave them shade from the harsh sun and roots that gave them somewhere to sit down and relax after a long day of cycling.

The Yathrees, who traveled from Kilinochchi to Vavuniya, endured challenging environmental conditions which included hot winds and harsh sunlight. However, as they traveled from Mulativu to Puliyankulam, they experienced a cooler, completely different ecosystem, as this route traversed the area between the Kulamurippu and Nagacholai reserves. To experience varying ecosystems and the wonders of Mother Nature was an amazing experience for all of the Yathrees and they made sure to appreciate every minute of it!

One day, the Sri Lankan army provided the Yathrees with an incredible opportunity to spend the night on the Bundt of Madavalasinghamkulam Lake, located in the midst of the Vavuniya jungle. It was a beautiful location and the Yathrees were able to truly connect with Mother Nature.

The next morning, the Yathrees were faced with strong winds as they cycled through the Natural bridge to Mulativu town, where they spent the day walking around the town and addressing people and government offices, educating them about ocean pollution and polythene usage.

After a tiring day, as they cycled the several kilometers passing Nandikadal Lagoon, the weariness of the Yathrees quickly disappeared as they saw the beautiful and lush area they were cycling through. With rich looking water bodies and the multitude of water birds and other animals residing in the area, the Yathrees not only learned about a variety of species but also were able to relax and truly immerse themselves in the beauty of Mother Nature.

The next morning, before dawn, the Yathrees woke up to the soothing songs of birds and the natural sounds of nature at Madavalasinghakulam Lake. They even participated in a session of environmental meditation and yoga, worshipping the sun and enjoying the calm serenity that it brought them. This forest area is a paradise for butterflies of different varieties, such as Mottle Emigrant, Common Jay and  Five bar swordtail, who were flying in bunches carrying colour to the ground as they clustered over moist leaves. This was a sight that many of the Yathrees had never seen before, and they soon learned that the butterflies obtain minerals needed for reproduction from the muddy, waterlogged soil, explaining this wonderful sight. Another unique species to this area is the rare Five bar swordtail which has, so far, been recorded only in the Southern wet zone and central zone of Sri Lanka. The Yathrees were lucky enough to spot them in the Northern Province, however.

Throughout the Yathra, these budding Green Leaders were encouraged to come up with novel thoughts and innovative ideas, and to enhance their skills as leaders. Most of the locations were intentionally selected to trigger their creativity; they were encouraged to come up with poems, songs, and art to express their emotions. This gave them an opportunity to discover their hidden talents and to discover new attitudes and to, more precisely, identify their true natures.

Importantly, this environmental programme facilitated the opening of a new road, along which to build civil reconciliation through creating a more sustainable environment together, as a united peoples of Sri Lanka. In a land soaked with the blood of a brutal, 30-year-long civil war, it was amazing to witness this 30-member family, made up of people from diverse backgrounds and religious beliefs coming together to serve a common cause: to serve a single mother- Mother Nature. Sinhala Yathrees who did not know a single word of Tamil at the beginning, with the help of their Tamil brothers and sisters, managed to perform a street drama and conducted awareness programmes in Tamil. Similarly, by the end of the 9 days, the Tamil Yathrees were speaking in Sinhala. While this synergistic family of Green Leaders observed the behavior of birds and the value of biodiversity in the Nandikadal lagoon, they were slowly becoming leaders of Climate Justice and will be a huge strength as a green force for the future of Sri Lanka.

This Yathra is the brainchild of a Yathree called Newton, who joined the Eco-V team as a member of the Kelani-Nadee yathra in 2011. He acted as the programme coordinator, representing the North as a Green Leader, under the guidance of ECO-V founder, Mrs. Kanchana Weerakoon.

The ECO-V team expresses their utmost gratitude to the local and international sponsors that helped support these Green Leaders in making this journey towards a more sustainable Sri Lanka. The team is also deeply thankful to the Sri Lankan police and army who helped to make this event a success.

On the 11th of  June, Vanni Yathra 2018 came to an end in Vavuniya. But, as the family of close-knit Yathrees bonded with each other, and excitedly talked about their collective plans for the future and all the green projects they wanted to initiate once they got back, it was clear that this is not the end of Vanni Yathra 2018, but the start of a long journey towards sustainability. 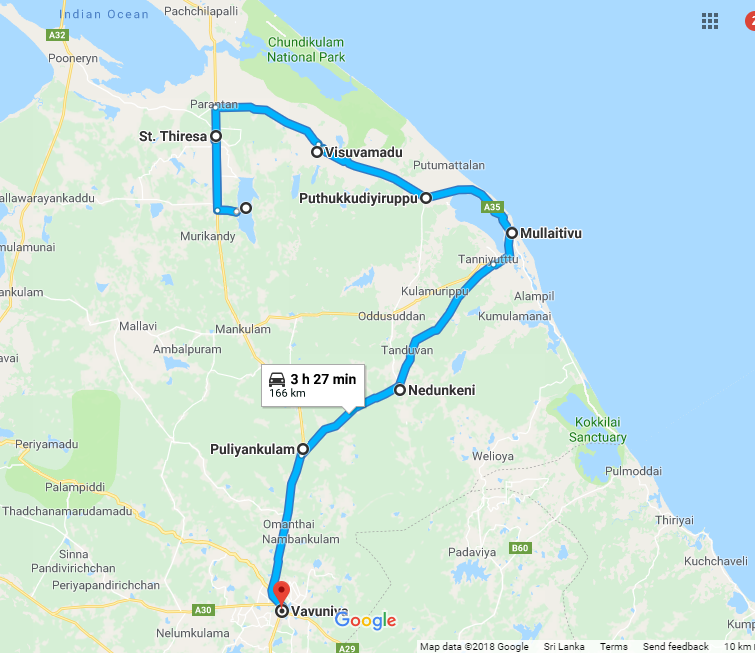 Special Thanks to Sri Lanka Army and Department of Police